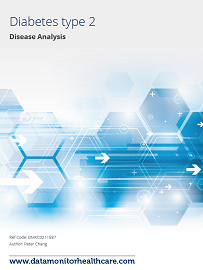 The type 2 diabetes market is dynamic and complex. In the non-insulin segment, while older generic drugs are widely used, especially first-line metformin in the US and EU, the more novel branded drugs are used in a sizable minority of patients, generating over $30bn in sales in 2021. The DPP-IV inhibitors have historically been the most commonly used of these, due to their safety and tolerability, albeit with intermediate efficacy, but GLP-1 receptor agonists and SGLT-2 inhibitors have now overtaken them in usage in the important US market and have curtailed their growth ex-US. The increased usage of GLP-1 receptor agonists and SGLT-2 inhibitors has been spurred by recommendations starting in a 2018 ADA/EASD consensus report for patients with relevant co-morbidities due to benefits on major adverse cardiovascular events (MACE) and, for the SGLT-2 inhibitors in particular, heart failure (HF) and renal impairment, along with related label expansions. This is expected to continue to grow usage of these classes, though intense pricing competition, with increasing rebates in the US, is typical across the indication. Some drugs have been suggested as candidates for the new Medicare Part D price restrictions starting in 2026, but the impact of that is unclear given the high average rebates in place already. In any case, loss of exclusivity will start to take a toll on all of these classes over the next 10 years.