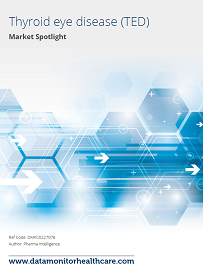 Thyroid eye disease (TED), also called Graves’ ophthalmopathy or orbitopathy, is an autoimmune disorder that causes inflammation in the orbital and retroocular tissues. It generally occurs as a manifestation of Graves’ disease, a condition in which the immune system attacks the thyroid gland, commonly affecting the eyes and skin. Although TED is usually found in Graves’ hyperthyroidism patients, some patients may have autoimmune euthyroid or hypothyroid thyroiditis. TED is mostly a mild, non-progressive, and self-limiting disease; however, in rare cases it can progress to vision loss. The negative impact of TED on the social and psychological wellbeing of individuals is an established consequence of the disease.